Enter your City name or Pincode

Bidar is known as Crown of State. It is the Northern most part of the Karnataka State which is bounded by Nizamabad and Medak district of Telangana state on eastern side, Latur and Osmanabad districts of Maharashtra state on western side, Nanded district of Maharashtra state on the northern side and Gulbarga district on the southern side. This is coldest and wettest place of this region. Here the soil is rocky and wells are difficult to drill. This place is a holy place for Sikh pilgrimage. Bidar is famous for its historical and architectural places as well as for Bidarware craft. This place has many fort one of which is Bidar fort which was built around 500 yrs back, around 30 tombs, temples and 61 monuments which attracts tourist from all over the world. Sometimes it can be seen that in this place film shooting is going on for Bollywood movies. 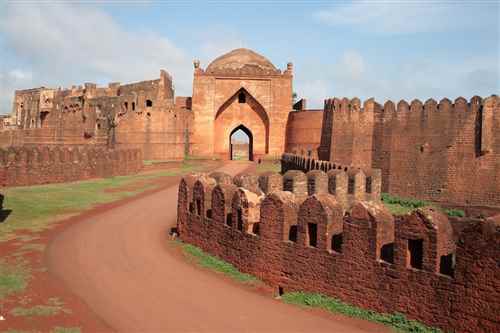 In 2009 – 10 Bidar was ranked 22nd cleanest city in India and 5th rank in state of Karnataka. Karnataka State Highway 4 (SH4) runs through Bidar which is about 69 kilometers in length. Common Languages spoken by people of Bidar is Kannada and Urdu.

Out of 640 districts Bidar is 250th district which is most backward and this was announced in 2006 by the Ministry of Panchayati Raj. Bidar is the 5th district in Karnataka which is receiving funds from BRGF (Backward Regions Grant Fund programme. This is a drought prone city.

Karez also known as qanat is an underground network of aqueducts for water supply and this system was recently found. This karez is about 3 kilometre long with 21 air vents. This network of water was built in 15th century. For providing drinking water facilities to tourists and other people living there a number of underground canal was build connecting the underground streams. The traditional method of harvesting ground water is called Surang Bhawi. This method is used mainly in arid and semi arid regions such as Bidar, Bijapur, Aurangabad, Hukkeri, Burhanpur, Pune, and Gulbarga. The first surang bhawi constructed in India was “Jamma Mori.”

Bidar is famous for formation of laterite rock. Laterite rock is residual porous rock which has worm like tubes and is made up of hydrated iron oxides and alumina oxide. This rock needs special kind of climatic condition we can say alternative dry and wet season for its formation. Its thickness can be measured as 49 ft to 200 ft from bed rock. Other places where this rock is formed are Basavakalyan and Humnabad talukas of the district.

Soil
In Bidar we can find mostly Black soil and Lateritic soil.

Black Soil: In Deccan traps you can find black soil and most area of Bidar are formed from this soil. This soil is dark in color and looks more or less like loam and clay. This soil has demerit of having poor infiltration capacity because of its high lime content.

Laterite Soil: This soil has the characteristics of good infiltration. The color of soil varies from pale to bright red and appearance varies from clay to clayey loam. This soil is mostly found in central portion of the district.

Minerals: Bauxite, kaolin and red ochre are the minerals found in Bidar area.

Rain: The average rainfall in Bidar is 885.8mm in which 81% rainfall occurs during the period of June to September. Bidar is drought-prone area where the rainy days on an average can be calculated as 52 days. Humidity is high ranging from 65% to 75% during southwest monsoon. During summer humidity is between 30% to 40% and is the driest part of year.

Wildlife: There are no Wildlife Sanctuaries and National Parks in Bidar. But sometimes leopards are seen. Langurs, wolves, deer, hares, porcupines, foxes are also seen. Poaching of deer are common here. The forests supporting wildlife are:

Bidar is known for its tombs and temples but besides this it is also famous for its bidarware, a kind if craft in which gold and silver is inlaid in the base of copper or zinc. A great range of bidarware stuff such as hookah, platter, trays, paan boxes, bowls, hair pins, vases, sindoor holders, suraahis etc can be purchased on which Persian designs and verses of Quran are encrypted. This place offers a huge variety of wooden crafting work, handcrafted items, sandalwood product etc. Shopaholic persons are most welcome to this place and fill their hands with these special stuffs. These artifacts are so exclusive that they are displayed at the Louvre Museum in Paris. Toy animals, abstract sculptures, utility items and knick knacks, all made from fragrant wood are easily available in market. Bidar has made its unique identity outside for its famous bidarware artifact. Bidar is such kind of place where you can enjoy family along with shopping.

Are you a Business Owner?

Add the products or services you offer